The striking and iconic GUKD branding has been applied to a number of key essential items for people of all genders, ages and sizes to purchase. Each style is available in black, white, grey marl and navy.

Proceeds from every sale go to the CIC to provide the kits and training for youngsters. We urge you to purchase garments, wear them with pride, photograph them, and post the results on Social Media. 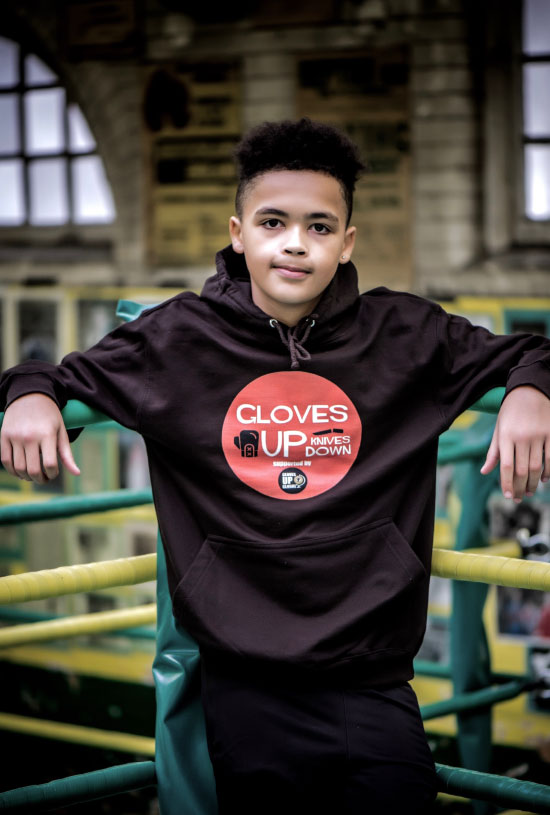 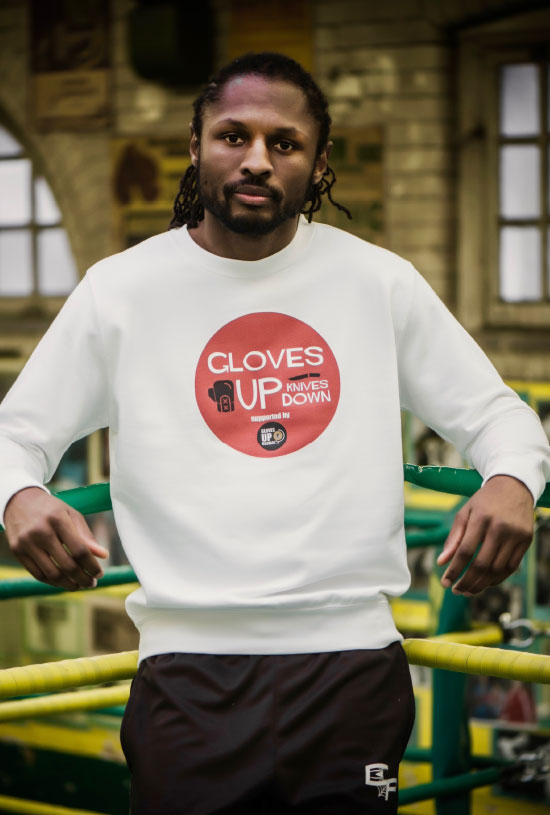 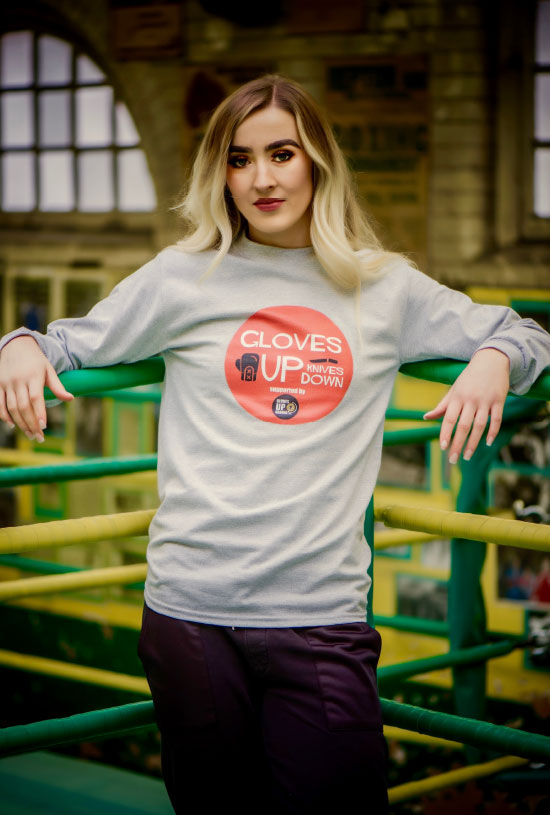 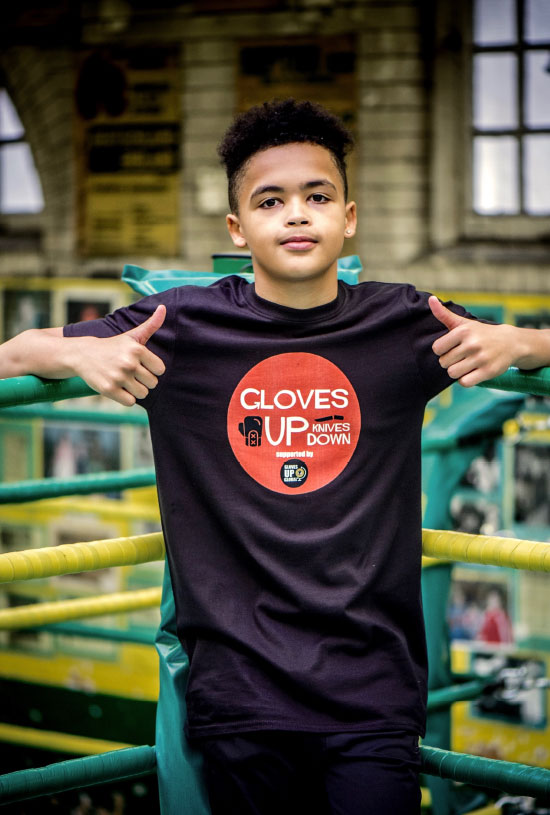 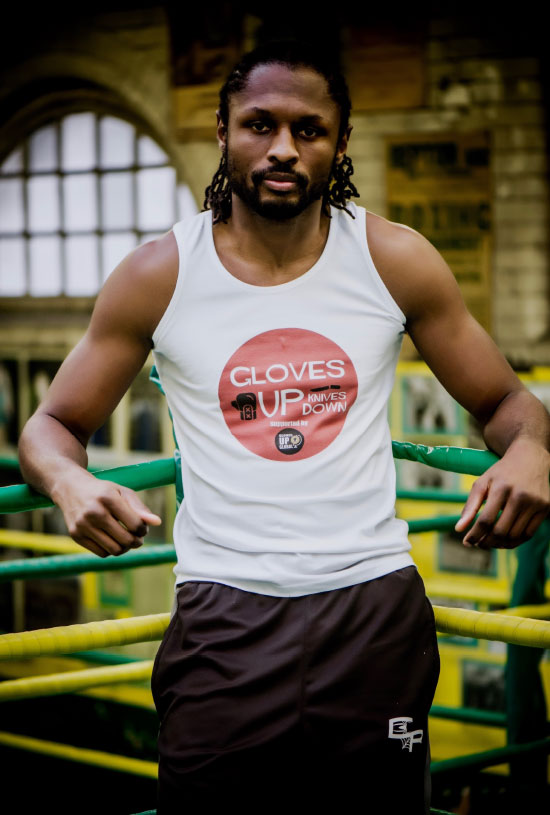 Gloves Up Knives Down, founded in 2019, is a Social Enterprise committed to supporting young people living in communities affected by knife crime, providing access to boxing training to help them lead fulfilling and healthy lives away from crime.

We believe that through the discipline of boxing we can provide young people with the opportunity to channel their energy and frustrations in a more productive and positive way. Helping to build young people’s physical fitness and mental well being as well as helping to create stronger communities.

Gloves Up Knives Down is committed to working with communities primarily across London to provide increased access to Boxing facilities in a variety of ways.

The income generated through the sales of our T-shirts, and third party donations, allows us to provide our Boxing Kits to community groups and schools to be able to provide regular boxing training sessions. These branded and desirable kits include gloves, a head guard, a vest and shorts, and a rucksack; all ready to facilitate the delivery of boxing training sessions.

Through the sales of our “Gloves Up Knives Down” T-shirts, and third party donations, we are generating revenue that can then be used to fund grass roots community initiatives that will provide access to boxing training sessions to young people living in communities affected by knife crime.

In April the Prime Minister hosted a summit to launch plans for a “public health” approach crisis to tackling knife crime placing a legal duty on doctors, teachers and police to report children at risk of being drawn into knife crime.

It is clear that a multi party, multi disciplinary approach needs to be taken to tackle this catastrophic violence epidemic including tackling the root causes of knife crime and providing diversionary programmes and interventions to young people. And we believe that boxing can be a positive route for providing positive interventions to young people at risk of knife crime.

GUKD is a response to the lack of meaningful responses to curb knife crime. It is a grass roots, high visibility initiative to encourage young people off the streets and into Boxing clubs.

The core ethos of GUKD is engaging in Primary Intervention, as advocated by Professor of Psychology Joana Carvalho Costa MSc, PhD, former consultant to the United Nations on Child Development and Youth Studies.

She asserts that early intervention and prevention of delinquent behaviour can divert juveniles from the adverse consequences that can result from delinquency.

There are a number of acknowledged Risk Factors, that increase a juvenile’s likelihood to engage in delinquent behaviour, amongst which are ‘early anti social behaviour’, ‘dysfunctional families’, ‘low academic aspirations’, and ‘access to weapons’, but none of which is a single determinative, and there is often an overlap of factors.

What are referred to as Protective Factors have also been identified to minimise a juvenile’s likelihood to engage in delinquent behaviour, amongst which include ‘engagement in healthy safe leisure time activities’ and having ‘positive and healthy friends’.

It should be acknowledged therefore that engagement of sport exclusively cannot reduce the levels of crime amongst teenagers. That having been said, research has demonstrated that participation in a structured sport environment, where a protective factor is included, certainly increases positive development, whilst deceasing certain risk factors.

Adult supervised sport training, contributes significantly toward giving youngsters a positive identity, helping to develop a sense of empowerment, and acquire greater social and cognitive skills, amongst which is self control. Such interaction also contributes towards more positive peer interaction, leadership, teamwork, and most notably, self governance.

The Boxing club environment, which has rigorous safety arrangements, teaches risk, and demonstrates that actions have consequences-simply put you can actually get hit if you don’t move quickly enough. The difference between real life and computer games could not be starker.

Boxing teaches teenagers, for whom frustration and aggression are part and parcel of their youth, how to engage with others on their own terms, contributing toward developing a sense of worth and self esteem, perhaps after not having been able to do so in other areas of their life.